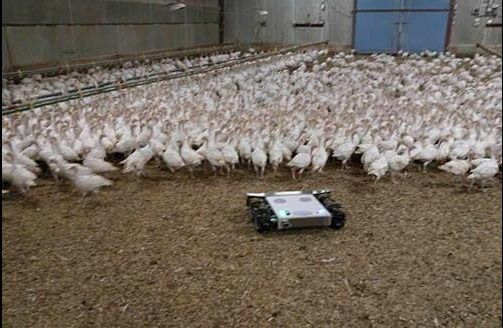 To increase the amount of meat obtained on the farm, it is not enough just to buy chickens and regularly feed them. Constrained conditions create at once a number of problems - abundance of the chickens in one place is the threat of overheating, epidemics and hypodynamia. With the first problem in the cultivation of chickens the automated ventilation systems are designed to fight (like a smart house, this topic is already partially examined here).

The mode of growing chickens is «sport»

The second problem is solved by vaccination and maintenance of cleanliness, observance of quarantine measures when growing chickens. But guns, to combat hypodynamia, which is unknown for wild animals, until recently there was no. To hire an individual who will work as a «scarecrow» is unprofitable. Especially now, when there is already a ready solution - the robot «scarecrow» for chickens.

In contrast to the garden scarecrow, this robot is created specifically for domestic birds. Under normal conditions, chickens prefer to stand still or even lie down. Regularly moving in every corner of the paddock with chickens, the robot changes the mode of growing chickens, causing the birds to move more. As a result, meat growth and general health are increasing, the use of antibiotics decreases.

Robot for growing chickens will take on a monotonous work

It is better to use the machines for the repetitive operations. That is why the use of a robot to improve the conditions of growing chickens is rational. Methodically moving around the hall, the robot forces the birds to avoid it, provoking a massive movement. As a result, a decrease in the incidence and increase in the amount of meat.