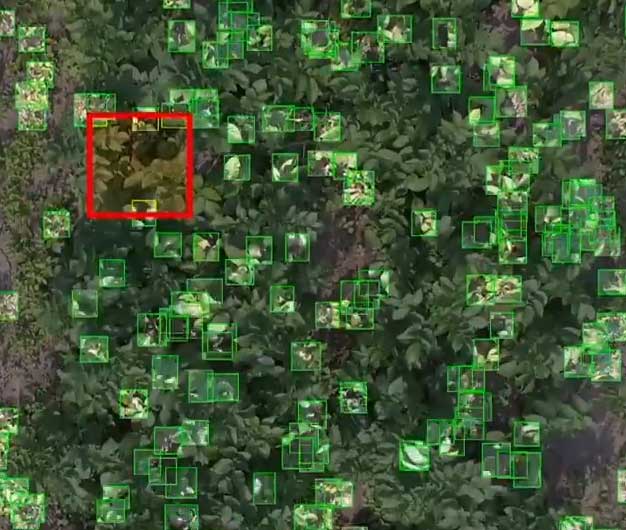 Insects can cause a decline in yield. To combat them, insecticides are often used. Indiscriminate applying of such chemicals all over the territory of the field has two serious drawbacks: excessive consumption of money and pollution of the environment. To avoid this, Japanese scientists offer equipment that allows the drones to find problem spots in real time. If a problem zone is found, it will be locally treated with pesticides or insecticides. This significantly reduces their consumption and prevents crop losses.

The second direction of using the drone, is the destruction of nocturnal insects, which can damage plants. For their own safety, many insects fly in search of food in the dark, when their main "enemy" - the birds are no longer active. As already mentioned above, there are not so many options to fight them - either to process the entire territory in advance or to catch insects as they arise. Until recently, the second option was rather fantastic. But, as you can see from the video, insects may well be "detained" at the time of the attack on the crop, if you use a drone equipped with an ultraviolet lamp that attracts insects.

This variant of night protection reduces the amount of plant protection products that must be poured on the field. It is not yet clear when the novelty will appear on the Ukrainian market. Perhaps local producers will take the idea into service and do something similar, taking into account the needs of local farmers.