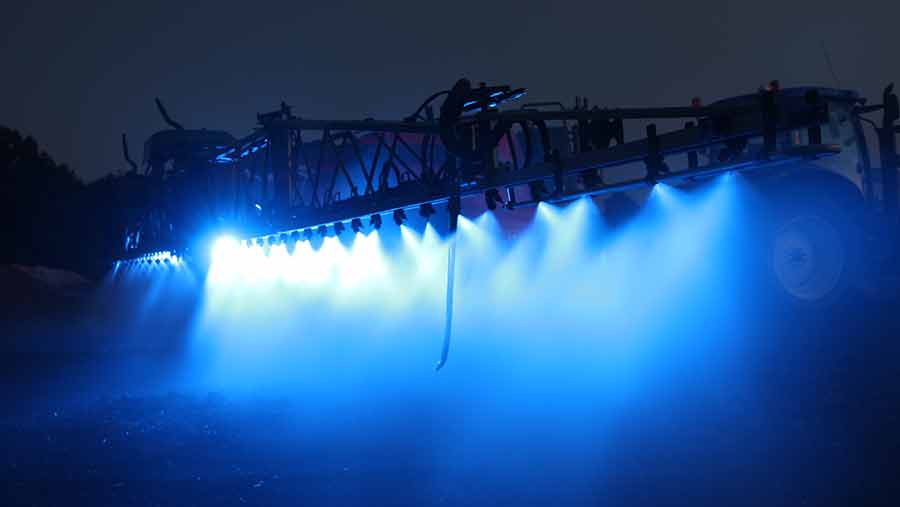 The Bedfordshire company Wilderness Lighting presented its solution for controlling the operation of the nozzles - blue LEDs for spraying control.

For the operation of the system, two powerful blue luminaires directed along it are installed on the rod. The monitoring process itself remains on the driver, he needs to regularly inspect both halves of the rod for the presence of a spray jet under each spray nozzle.

Thanks to the blue backlight in the dark and twilight, such work is greatly facilitated. The performance of visual control depends on many factors - how often the driver looks around the bar, how good his eyesight is, the fatigue factor. It should also be noted the difficulties associated with keeping the sprayer on one course, for which you need to constantly look at the screen of the device parallel driving.

To solve this problem, the company «Comprehensive AgroService» offers a device for monitoring clogged injectors. The installation process of this device consists of the inclusion of electronic flow meters in the supply line of the working fluid and their connection to the display.

The presence of this device simplifies the work of the driver - if the movement of the fluid is interrupted, a beep will sound and a message with the number of the blocked line will appear on the screen. Then the driver will be able to take action. The rest of the time, the driver can work without distracting from the control of the sprayer.