Adjusting, calibrating and testing of the fertilizer spreader

Disc spreaders are used in agriculture for the application of granular fertilizers and liming the soil. Self-propelled sprayer-spreader «Vodoley 2» with the Vibro System feeding system, can also be used for planting a number of crops. The spreader with proper adjustment, shows good accuracy of application

Before starting the calibration, the owner must ensure that all spreaders parts are in good condition and are working properly.

The quality of granular fertilizers applicating can be influenced by many factors:

Checking the dosing device of the fertilizer spreader

A device that provides the exit of the granules from the tank can operate at different speeds, for which various valves and mechanisms are used. At this stage, you need to make sure that the mechanism as such works and that the table data allows you to select the desired rate of precipitation of the granules of the fertilizer with which the work is planned.

First you need to make sure that the speed of the rash from the tank corresponds to that stated in the documentation. Depending on the type of drive on this sprayer for such a test, you need to either drive a fixed distance or turn on the power plant, feeding mechanism. At the same time perform collecting the poured material into a special container for subsequent weighing.

Further, according to the tabular data, based on the size of the granules, their weight and humidity are trying to get the desired speed rash.

According to the results of this check, it can be understood whether the system for supplying the dry mixture from the tank is ready for operation. If there is a need, the mechanism is calibrated with regard to the forthcoming dose of scattering and the type of substance introduced. Results should be within 1-2% of target values. If the deviation is more than 5%, then adjustment of the dosing unit operation is necessary.

To simplify this work, the spreader can be raised (remove the drive wheels) and measure by the number of revolutions of the wheel, rather than the distance traveled.

Before starting applicating fertilizers on the field, you need to be sure that the the tachometer in the spreader cab shows real rotate frequency. To assess the actual speed of rotation of the disks, you can use a mechanical or electronic tachometer. In addition, if there are two disks, then the number of revolutions per minute in each should not differ by more than 10 rpm.

Pan-testing of the fertilizer spreader 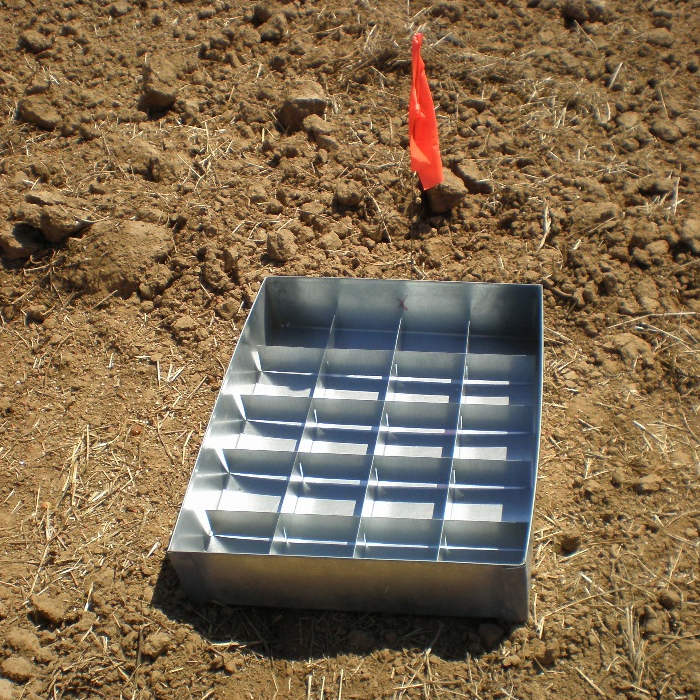 To carry out such a calibration, a specially equipped platform is used on which the containers for collecting the granules should be placed. The distance between each of them is 1 meter. The width of this band must exceed the manufacturer’s stated spread distance for pellets.

All spreader mechanisms at this point should be already calibrated and verified. After that, the selected fertilizer feed mode is activated and the spreader passes across this row of containers.

Pellets from each tank are poured into measuring glasses and then you can make a vivid picture of the spreader work.

If the result is unsatisfactory, you need to take measures to adjust the work of the self-propelled spreader. If everything is in order, then you can start using this spreader in the field.